In a short space of time a close friend and my brother in law both found themselves with babies on the way. Naturally, my contribution to this happy time was the traditional congratulatory cigars for the new fathers (I’ll talk later about some of the lesser known cigar/new baby traditions).

I thought it was a good reason to try the My Father Cigars I’d seen and heard so much about. The box certainly makes for a great gift as it’s painted a gloss green and looks quite decorative, with a green ribbon to help remove the first cigar from the perfectly rows. 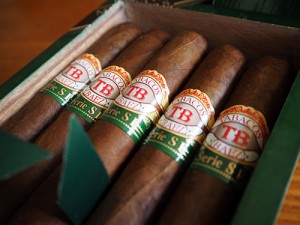 I was impressed at first by the smell – although the cigar is hand made in Nicaragua, the mix of Cuban-seed Nicaraguan longfiller and shortfiller brings all the scents of a traditional Cuban cigar. You can pick up that earthy, musty, almost fertiliser like smell, with a sweetness just beyond the surface. It’s a dark coloured cigar with a firm body, though perhaps a little too firm.

I usually prefer to hole punch my cigars, but it didn’t really work too well here, leaving me to pull the cut pieces out of the end. A cutter would probably be more useful on this one. 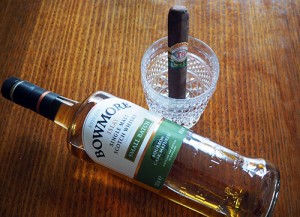 My brother in law’s baby came along first, so he got stuck into the cigars without me. He found them to be a bit rough at the start, before mellowing out. I thought this may have been because he didn’t have a humidor and they were just individually plastic wrapped as they came in the box.

I took one home and left it in my humidor for a week and I had to give him credit, this cigar is quite rough on the first few drags. You can pull a good even draw, but it’s a surprising, and rather overwhelming hit to the senses straight off the cuff.

After letting it sit for a minute or two, it turns out to be quite smooth with subtle, sweet flavours, a nice medium bodied cigar. While rather delicate, you can pick up notes of cedar, cocoa, pepper and even earthy, espresso coffee flavours. 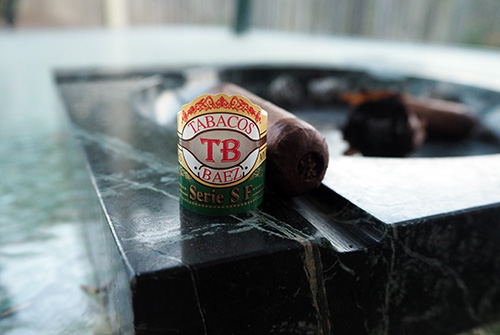 It burns quite evenly throughout and doesn’t overpower the palate, so you can pair it with any reasonable drink of choice. With the exception of that first blast, this is a really easy smoking cigar, making it pretty ideal for those celebratory situations where not everyone is a regular cigar smoker.